We visit an apiary in a nearby village (Domantove village - Oleksii Vasyliovych Rybalka).  Our first look at a few of the local hives.  First thing that comes to mind is the apparent weight of these colonies.  Some are double long hives with 20 large Dadant size frames.  This is the winter location for the colonies; they are moved several times during the honey making season.  The colonies are extremely gentle; they are also weak in population as winter approaches.  They tolerate being opened without a smoker and being surrounded by a gaggle of tourists; smaller populations are helpful this way. They are uniform in color; not too dark.  The look bigger than most, but this is hard to measure.  Their behavior reminds me of A. mellifera caucasica that I saw once on the Ile d'Yeu off the coast of France in the apiaries of Patrick Vienne   No defensive behavior in spite of a gaggle of tourists invading  the apiary.   The beekeeper host says they are Carpathian bees; local Ukrainian honey bees; he raises his own queens, probably just letting them supersede as needed. 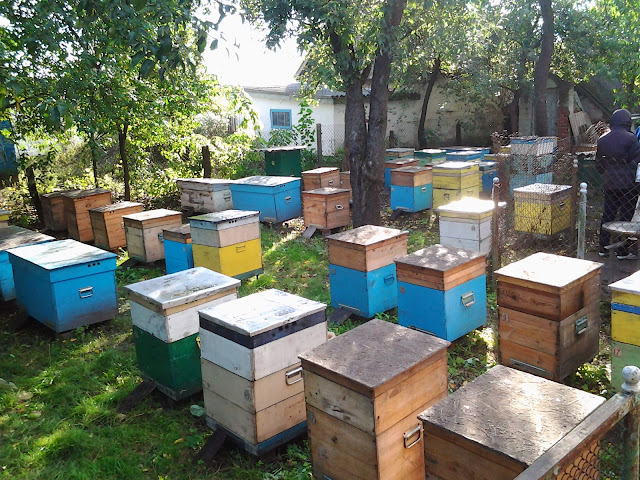 Note the large  double hive in the foreground of the next picture.  These are some heavy colonies no doubt and deserve to be equipped with heavy duty handles. 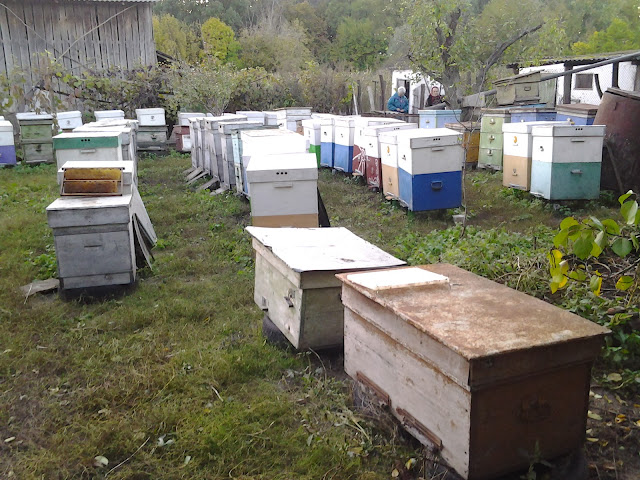 Ukrainian  beekeepers are also into various kinds of trailers to more easily move colonies.  Usually they have are in this configuration with two rows of colonies separated by a sort of walk way in between for access. 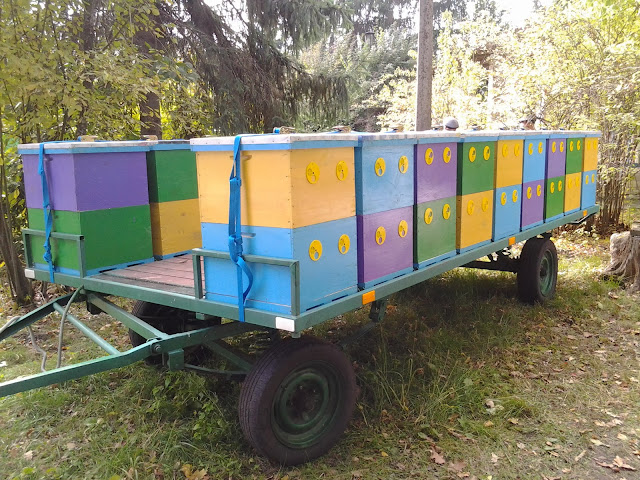 Note the spacious interior work space for the beekeeper.  Some also have elaborate ways of unloading each bank of colonies on a special trolley-like affair so the trailer can be offloaded if necessary and moved to another location. 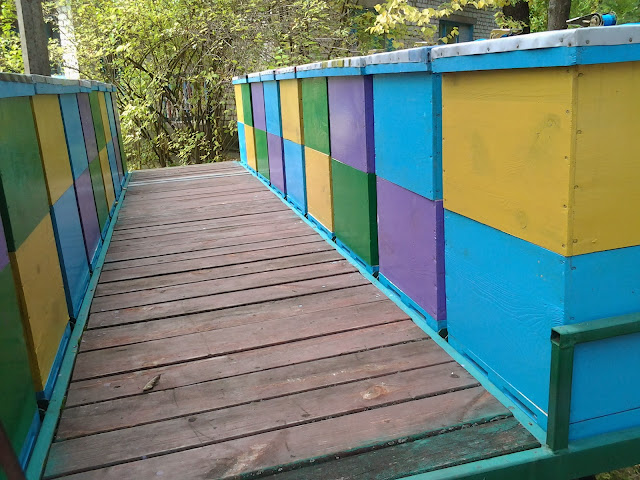 Here's another much  more high tech version of a bee trailer sold in the country: 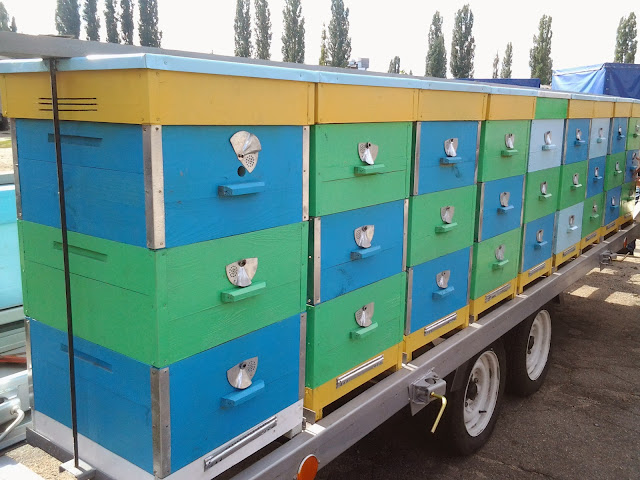 A paper at Apimondia reveals several types of Carpathian honey bees exist it seems and they are in reality, Apis mellifera Carnica var. ukrainica carpatica.  Four specific variations have been created after 20 years of intensive breeding at the National Sciences Center "P.I. Prokopovyh Beekeeping Institute": they are: Vuchkivsky, Hoverla, Rakhivsky and Synevir.  These are in a "bank" called Carpathian Honey Bees of Zakarpattia."  The use of "Beemorph & Beemetry" software is in use.  At least one company is marketing what are called "steppe bees,"  and has been named a "breeding farm."

The history of a company named "PCHELOAGROSERVIS," which was on display at the congress, included not only producing equipment, but raising honey bees.   Its history dates back to the war years.

"In 1943, immediately after the liberation of Dnipropetrovsk from the Nazi troops, was organized by the regional office of Pchelotehsnabsbyt. " Order number 1 on November 6, 1943 recorded the official date of birth. Although the basis for the firm was formerly the regional economy pcheloupravleniya, which was partially destroyed and removed the invaders. For the season 1944 workshop for manufacturing artificial honeycombs has been fully restored. And in April 1945, was organized by the Regional Sinelnikovskoye apiary in the area, which was later pchelopitomnikom.

"From 1975 to 1978 a new base of the regional office of beekeeping was built. Prior to this workshop and warehouses were located in rented premises of the Upper Red Market and the housing department of the Kirov. Since February 1978 the office moved to its premises at Ul.Sovhoznaya, 78. Functioning on the territory of three workshops: workshop production of artificial honeycombs, pressing wax production plant medicinal paste.

"Yet for 10 years, is expanding its regional office functions. 23 May 1988. opens regional pchelopitomnik. Between 1988 and 1996, efforts were made to revive the Ukrainian steppe species of bees. The result of this painstaking and successful work was the assignment pchelopitomniku status of breeding farm for the breeding of bees Ukrainian steppe species (Ministry of Agriculture number 123 from 23.04.1996g.). Since then, the breeding plant breeding thoroughbred implemented bees, bee packages and fetal queen bees."

Bee races and their biology are getting more and more attention as researchers and beekeepers are examining the local bees in most countries using DNA analysis.  Thus, there were papers at this Apimondia, not only on the honey bees of Carpathia, but also Greece, Turkey, France, Spain, Italy (Sicily), Benin (Africa), Jordan, Russia, and China (Xinjiang).  In general the idea is the categorize the local races before they become "contaminated" by other bees, as moving of colonies and honey bees around the world is happening at almost warp speed.  A world bank of honey bee genetic material  is needed, rather like seed banks for plants.

One thing catches our attention in the apiary we are visiting.  The newly completed "bee therapy house"  below is an innovation the beekeeper says comes from Crimea, probably via Poland.  The  idea is that the colonies located at the foot of the house (the green, yellow and blue hive fronts pictured below) provide an environment that is healthful to humans.  The humans spend about two hours in the house, in essence communing with the insects, although the colonies are screened so individual bees cannot enter the house proper, but use external entrances in the colored hive fronts  to come and go.  It is so new the beekeeper doesn't know how much to charge for the service, allowing patrons to set their own price at the moment. 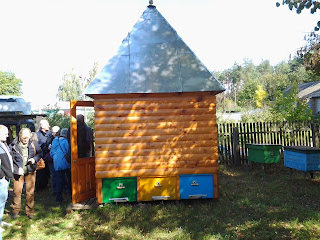 Here's  another version of a therapy house on display at the Congress; again note  bee entrances under the window for hives  inside, which have benches built over them to sit/sleep on. 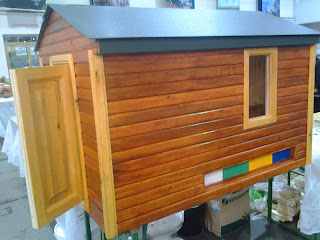 Every bee yard features a table of honey and mead that is offered to visitors.  Too much cannot be said about the quality of both products.  Note  the quite yellow,  crystallized honey;  sunflower is the source.  The mead is dry with a crisp flavor that is quite pleasing. 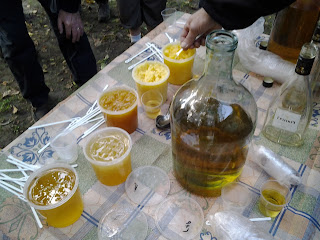