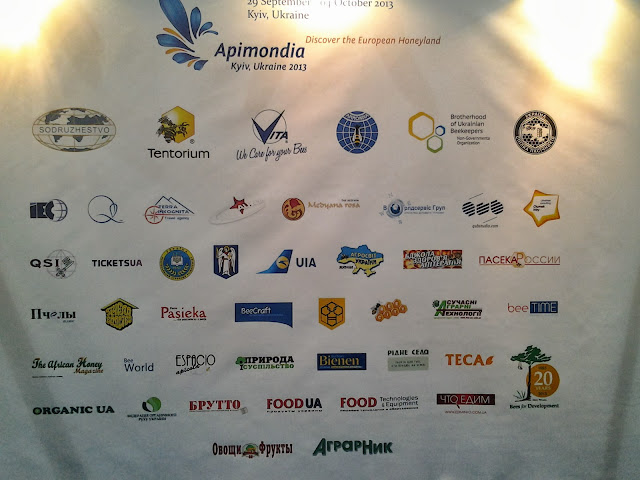 Press conference today with a small attendance.  Yuriy Ryphyak, who marketed the event heavily during Apimondia in Australia, gave a rundown on how long it took to get Apimondia 43 off the ground.  It started with the Congress in Ireland in 2005; the bid was accepted in Australia in 2007.  One of the issues was to provide at the Ukrainian Congress some standards for the world beekeeping awards. in Ukraine 25 countries participated this year, so this is considered a success that will be built on in the future.  The Congress itself is well organized and there is a lot of energy in the exhibit area.  In the press room many organizations are found listed above, however, the attendance did not reflect this number.  Tomorrow there will be another on the scientific aspects of the conference.

Two areas heavily promoted here are a social innovation areas (crafts) and world awards: best mead, honey, beeswax and beekeeping display.  The exhibit area is also extremely well organized.  The problem with this Congress is the organization of the registration process, which has overshadowed the whole event. Another issue is the funding; when the event was marketed it appeared that a lot of governmental resources were behind the effort, principally because the president at the time was in fact a beekeeper.  Unfortunately, he was voted out of office shortly after the bid was accepted.  Those resources were then redirected elsewhere it seems.  This appears to be a chronic problem in Ukraine affecting all kinds of activity; little continuity and shifts in priorities act against long-range planning.

See a large number of photos found on the web site from each day of the Congress.