Pereiaslav-Khmelnytski:
A visit to the Museum of Folk  Architecture and Household traditions, including  a beekeeping museum, was on the agenda this morning.  This museum shows the  evolution of house construction in Ukraine from around 600 bc to the1900's. Part of this is a contemporary beekeeping museum recently donated to the museum by a son whose  father had been a beekeeper his whole life. 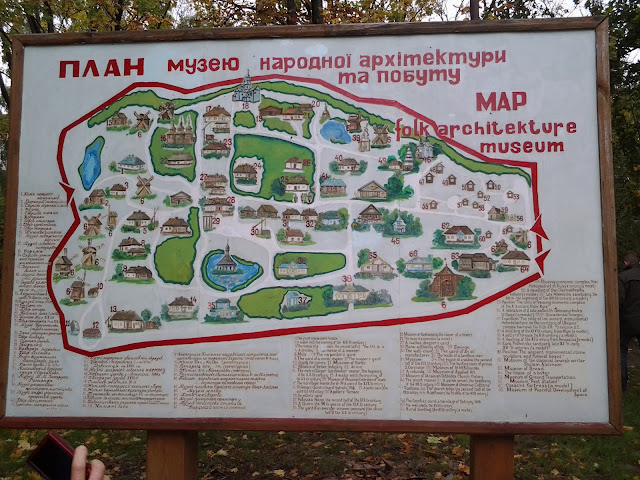 This map provides a layout of the place.  It's several hectares and includes many building types and other items of interest.  Note that most of it is in Cyrillic script. One starts at the entrance middle left hand side (arrow) and proceed around the property counter clockwise. 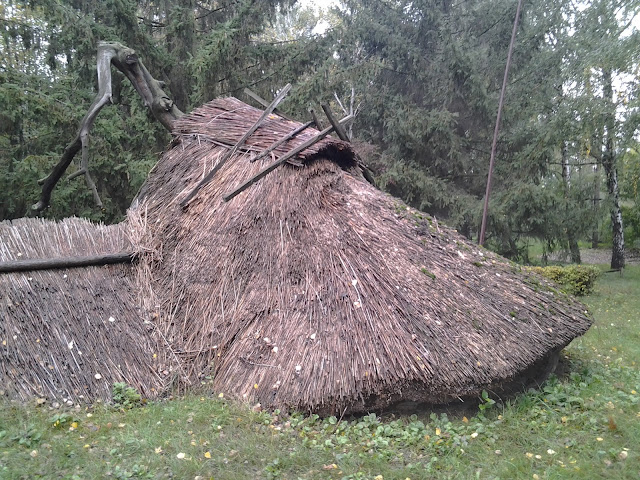 Here's the oldest dwelling on the property, not far from the entrance.  Nothingmore than a cover of reeds, but providing some shelter.  Dated about 700 BC? 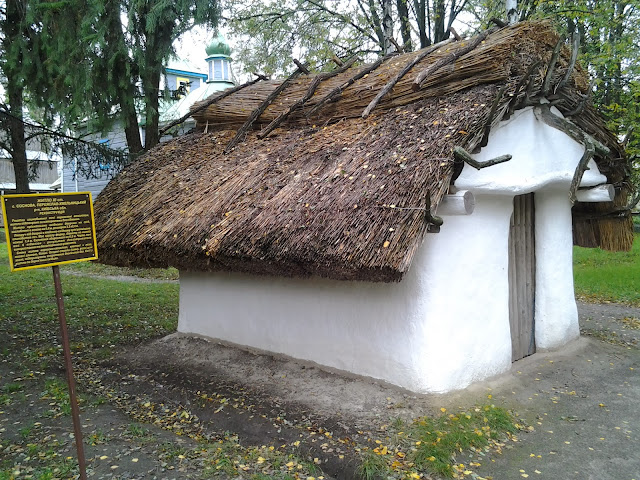 Here's a later dwelling.  From here wood began to be employed and some places had extensive stockade walls for protection. Several renditions of early Cossack churches are on display.  This is probably the most spectacular, built around 1880 I believe. 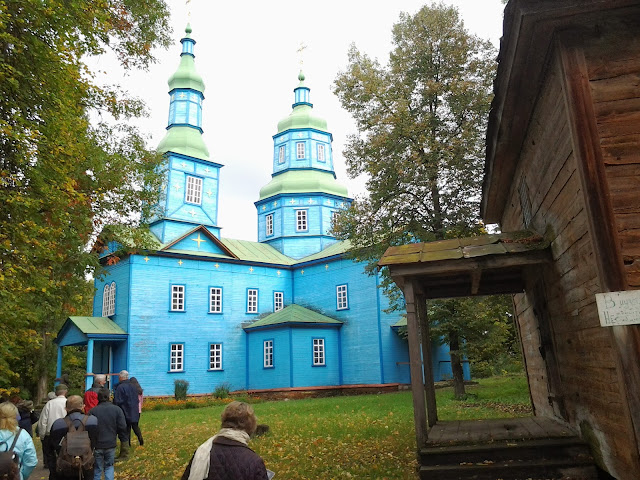 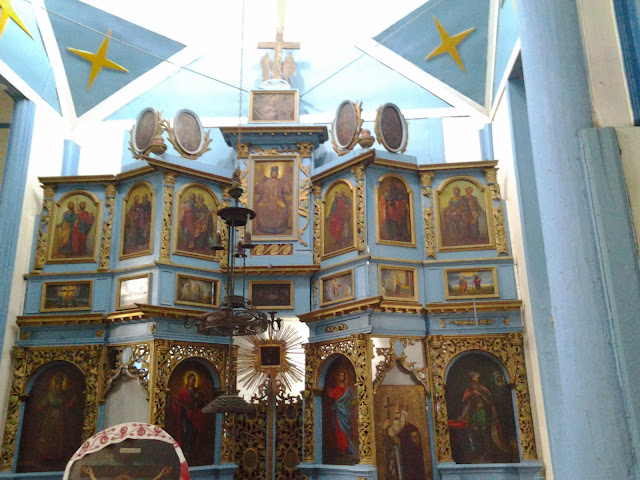 Both outside and inside views are shown here.  In the Eastern Orthodox religion, male (right hand side) and female (left hand side) personages (icons) are segregated.  This also has no seating arrangements; standing room only apparently.

Cold and windy this day, but we didn't know what awaited us at the next stop.  Three hundred and thirty (330) steps up to Tarasova Hill, where the Ukrainian poet and social activist, Taras Shevchenko, is buried.  A raft of youngsters on holiday from school were placing flowers at the foot of the  monument. 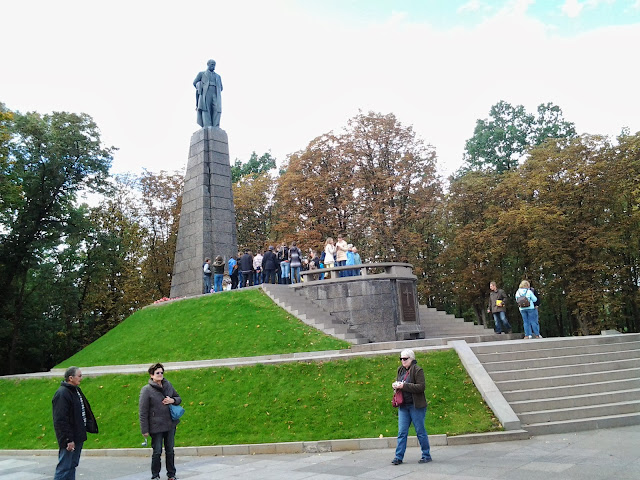 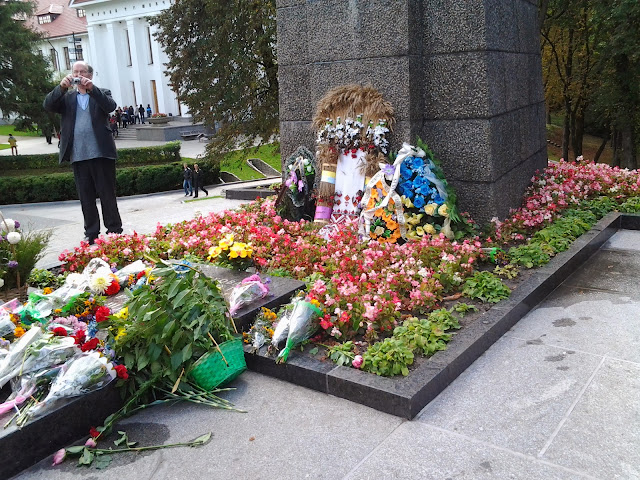 There's a great view of the Dnieper River from this hill. Upriver and downriver are seen here.  The flatness of the great Dnieper delta that has traditionally been the breadbasket of this region is seen extending to the horizon. 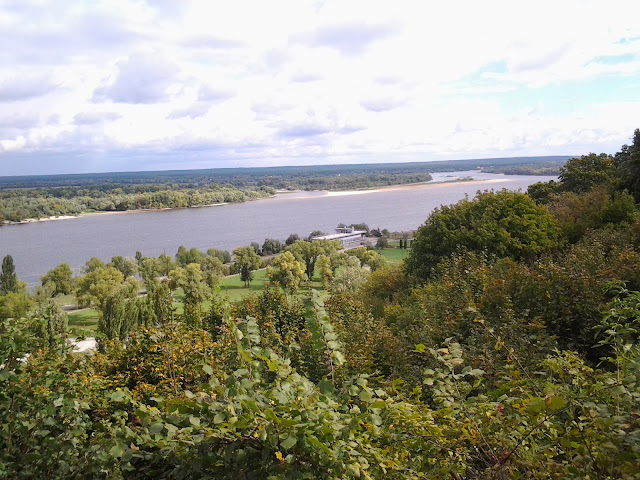 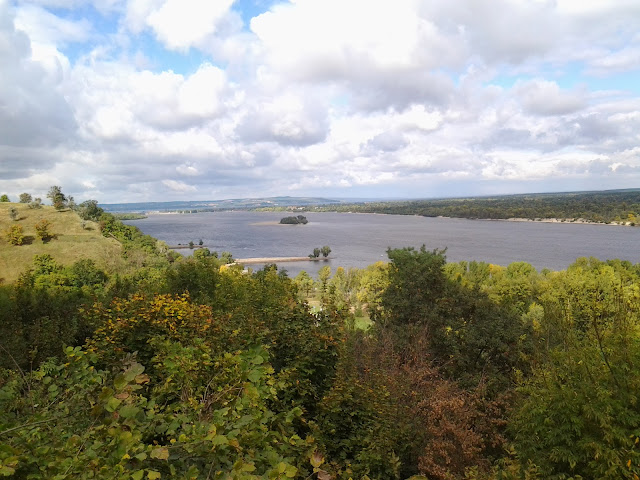 Taras Shevchenko is clearly one of Ukraine's best loved sons.  Beginning life as a serf, he became educated through his owner and became a poet writing a book  that a whole museum is dedicated to, painting iconic works of art and converting himself into an activist who spent many of his days imprisoned, dying early in life (47 years old).  His grave is a must see for Ukrainians and tourists.
alike.