I find myself with some time to discuss the Ukrainian situation that the honey export start up I visited yesterday faces here.   The company is ATS Ukraine, which formed around 2003. Most honey-producing firms in developing world look to the export market first, often ignoring the domestic.  Consultants often suggest the domestic market is where the growth is usually, and the business model should include that part.  In Ukraine, however, the problem exporters have is the huge Ukrainian domestic market.  Honey is hard to come by.  Ukrainians are such big consumers it makes it difficult to find honey for export!

In addition, the price in the domestic market for all these consumers is determined not by the product, but by tradition.  It is set by the ever-present Ukrainian "Babushka," (grandmother) who has always paid a fixed price.  Anything above or below the "Babushka price" is looked at with askance.  Producing a premium product, therefore, runs into this fixed-price phenomenon.

Ukraine produces a lot more honey than most European countries and so has been an exporter before the European Union (EU)  formed.  However, with inclusion into the European Union of a number of countries that previous were part of the Soviet and then Russian sphere of influence, the rules stiffened, shutting down much of that market.  The new EU rules have resulted in a increase in testing for residues in Ukrainian honey, which was found to be often contaminated with residues of antibiotics.  Testing raises the price of the honey both in the EU and Ukraine, limiting new firms like ATS-Ukraine access to Ukrainian domestic market which has a low fixed "Babushka" price.

Here's a picture of the honey processing facility in construction. 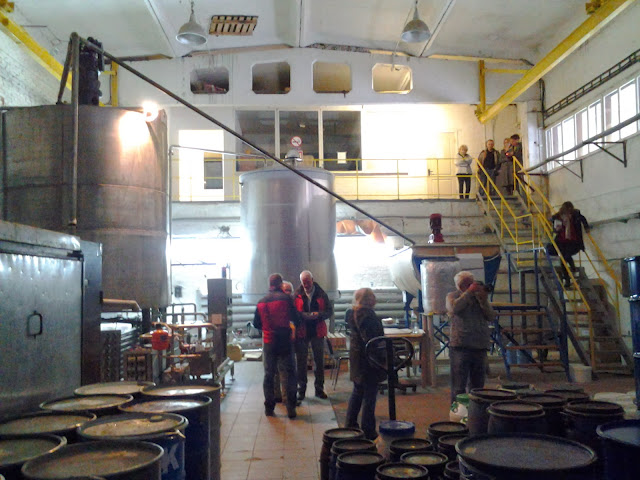 Another photo shows the wide range of containers ATS-Ukraine is faced with as beekeepers of every size bring in their honey crop for testing and processing. 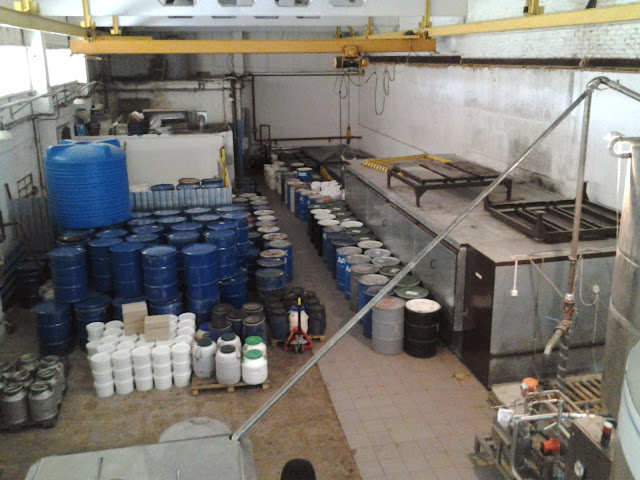 Contamination has also resulted in Ukrainian honey being looked at as somewhat inferior.  This reputation has been enhanced by the fact that many equate Ukraine with contamination from the Chernobyl disaster that is continuing.   So a public relations campaign is needed to convince people this is not so.  All these things mean that ATS Ukraine faces significant challenges as it ramps up both its domestic and export market, but that's what happens when you are the first kid on block and with signficant risk often comes great reward.

More about the honeys of Ukraine in another post.
Posted by Beeactor at 12:59 AM