Today, I was invited to a meeting near a town named Barishivka, north of Kiev. It commemorated the 10th anniversary of this regional beekeeping event.  About 250 beekeepers met in the woods at a "camp" to display their wares, talk about beekeeping, and socialize.  The event also included presentations by dignitaries, including local politicians and visitors.  One Russian woman beekeeper managing around 250 colonies provided a slide show of her operation.  Extremely good looking, she got some "cat calls" from the audience, mostly older men, asking the whereabouts of her husband.

There were presentations of thanks and recognition for beekeepers in nearby countries including Kazakhstan  and Uzbekistan.  It seems this organization  (camp) awarded some scholarships to beekeepers in those countries to attend a beekeeping workshop in Israel.  Few foreigners were present; only myself and a researcher from France, one of the many scientists employed by the French National Research Institute (INRA) , Jean Francois Odoux, who presented posters at Apimondia on topics including Romanian plants important to bee health and the importance of pollen diversity in large-scale plantings of sunflowers and rape in France.  The result are similar to what we know concerning lack of nutritional resources in the corn belt of the midwestern U.S.

The displays included all kinds of beekeeping paraphernalia and was attended by one of the large Polish manufacturers of beekeeping equipment, Lyson, also having a large presence at the Apimondia Congress.  Many of these beekeepers were not in attendance at Apimondia for various reasons, including political conflict with the organizers and the fact that the registration fee was considered too expensive.

My host, Alexander Komissar (right below), is a leading beekeeping scientist, beekeeper and prolific writer.  I am on the left with the broad brimmed hat.  A  French colleague attending the Congress is in the center.

Many of Alexander's books were on display at the camp.  He is one of the pioneers of this event and has a terrific website about Ukrainian beekeeping.  I met him in St. Peterburg Russia in 2005 when we both provided presentations to the IUSSI,  the first meeting of the European section to meet in Russia after collapse of the Soviet Union. Also present was the current head of the prokopvych institute we visited the day before at beekeeping museum of the Ukrainian National University. 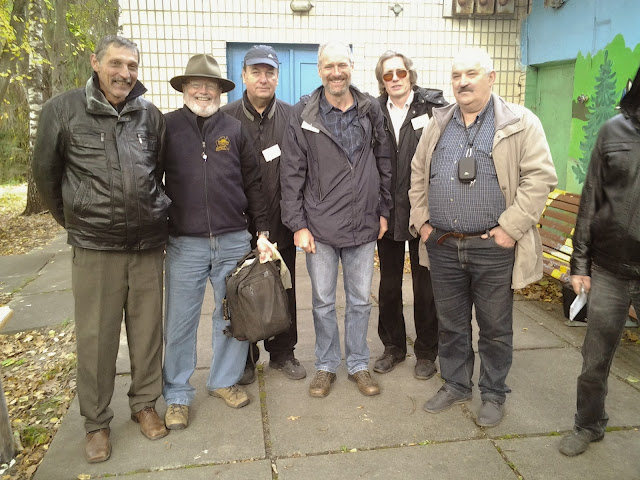 Clearly evident at the camp was the presence of mead-like beverages of uniformly great quality.  Also present were both traditional equipment (foundation, beekeeping tool, etc) and several different kinds of hives (enclosures), mostly wood, however, styrofoam of some kind was also apparent. 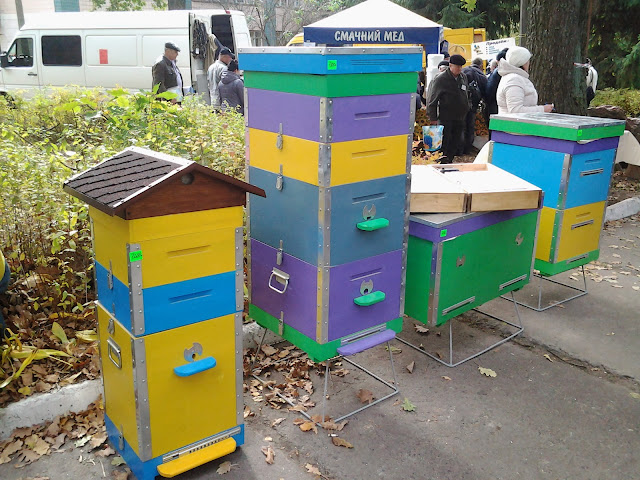 It was very cold at the camp.  During the Apimondia congress the weather was unseasonably cold; many places had yet to turn their heating systems on; this usually occurs around 15 October.
Posted by Beeactor at 9:54 AM